Today I would like to welcome you all on my stop of the Blog Tour for Wolves At The Door By Gunnar Staalesen and I would like to share an excerpt, with all of you. Thank you very much to Anne from Random Things Tours for the invitation. Please do show some love to all the wonderful book bloggers on this blog tour by following and sharing their work. 🙂 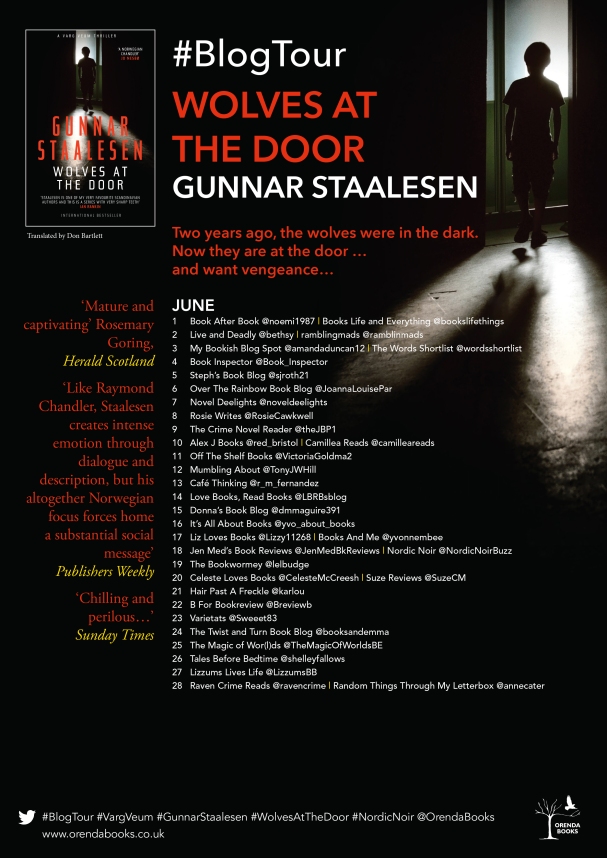 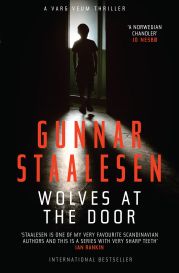 Description of the book: One dark January night a car drives at high speed towards PI Varg Veum, and comes very close to killing him. Veum is certain this is no accident, following so soon after the deaths of two jailed men who were convicted for their participation in a case of child pornography and sexual assault … crimes that Veum himself once stood wrongly accused of committing.

While the guilty men were apparently killed accidentally, Varg suspects that there is something more sinister at play … and that he’s on the death list of someone still at large.

Fearing for his life, Veum begins to investigate the old case, interviewing the victims of abuse and delving deeper into the brutal crimes, with shocking results. The wolves are no longer in the dark … they are at his door. And they want vengeance.

I heard the car before I saw it. I had been on a little job for a married couple who lived in one of the new residential areas at the rear of Lagunen Shopping Centre. They had asked me to park discreetly when I visited them, and I was on my way back down to my Toyota when I heard a snarling engine just behind me. I had enough time to turn around. The vehicle was coming straight at me with no indication that it was going to veer away. For a second or two I was paralysed. Then I reacted instinctively and hurled myself to the side. The car was so close to me that I felt a rush of air as it passed. I fell into a pile of snow the JCB ploughs had left during the Yuletide break. Now it was the first Sunday in January and the weather was as cold as it had been since Christmas. What the…? I said to myself. My heart pounding, more shocked than frightened, I sat up in the snow and stared at the tail lights of the car racing down at the same breakneck speed. It was much too far away for me to read the registration plate, but in the evening gloom the car looked grey, and if I wasn’t much mistaken it was last year’s model of the VW Golf. I watched the tail lights go past the shopping centre and out to Fanavegen, where it took a right into Bergen and disappeared behind the hills there. I struggled to my feet and stepped onto the road. I looked up to make sure there were no more cars hurtling down at me and to see whether anyone was out walking who could confirm what had happened. But there was no one in the area between Lagunen and the petrol station before Fanavegen. Hadn’t the driver seen me or had he seen me all too well; in other words, had he intentionally tried to mow me down? Could it have anything to do with the case I had just solved? Hardly. It was so insignificant that the only people who might react to it would be the tax authorities, because my fee was so modest that there was virtually nothing left for them, even including VAT. On the way to my Corolla it struck me there might be another link and this worried me. I became even more worried than I had been when I first noticed the two deaths: one in October, the other two months later. I had made only a mental note of the first. After the second, I had a suspicion there was something fishy going on. In both obituaries the surviving families had used the words ‘died suddenly and unexpectedly’ and this is what set me thinking. ‘Suddenly and unexpectedly’ as in … murdered? But there had been no mention of it in the newspapers I had seen. I hadn’t met either of the two men, but their names – Per Haugen and Mikael Midtbø – had been seared into my memory. Soon it would be a year and a half since we had, for a few dramatic autumn months, shared a similar fate: all three of us had been accused of the same crime. This was a period of my life I had consciously tried to repress. Now it all came flooding back. When I reached my car, I unlocked the door, got behind the wheel and rewound the previous sixteen months, to the morning when I was woken by the police for what in the course of a few days would develop into the worst nightmare I had ever experienced, and I had been wide awake.

About the Author: Gunnar Staalesen was born in Bergen, Norway in 1947. He made his debut at the age of 22 with Seasons of Innocence and in 1977 he published the first book in the Varg Veum series. He is the author of over 20 titles, which have been published in 24 countries and sold over five million copies. Twelve film adaptations of his Varg Veum crime novels have appeared since 2007, starring the popular Norwegian actor Trond Epsen Seim, and a further series is being filmed now. Staalesen, who has won three Golden Pistols (including the Prize of Honour) and the Petrona Award, and been shortlisted for the CWA Dagger, lives in Bergen with his wife.

*-the price was taken from Amazon.co.uk and Amazon.com on the current date. The price might change at the time of your purchase. The links used in this post for book purchases are affiliates.

Reviews of books to suit every budget and host of Goodreads Monday, Time Travel Thursday, All Over Instagram and Places My Books Have Taken Me!