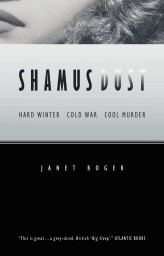 Description of the book: Two candles flaring at a Christmas crib. A nurse who steps inside a church to light them. A gunshot emptied in a man’s head in the creaking stillness before dawn, that the nurse says she didn’t hear. It’s 1947 in the snowbound, war-scarred City of London, where Pandora’s Box just got opened in the ruins, City Police has a vice killing on its hands, and a spooked councillor hires a shamus to help spare his blushes. Like the Buddha says, everything is connected. So it all can be explained. But that’s a little cryptic when you happen to be the shamus, and you’re standing over a corpse.

“Imagine …Chinatown played out against the bomb sites and grimy alleys of a freezing 1947 London.”

So said a reviewer of Shamus Dust recently. It’s a startling invitation, and it gave me food for thought. The comparison, after all, is with a film nearly fifty years old, and one of my personal favorites; a dark (even though sun-bleached) re-telling of the California Water Wars, from a terrific (and Academy-winning) screenplay by Robert Towne. Set as it is in late-1930s Los Angeles, what could be further from Shamus Dust, set in war-scarred London at Christmastime a decade later, in the worst winter in memory? And yet they do have things in common, both in the anatomy of the two stories and in the way they’re told.

As big as Chinatown’s background story is – the City of Los Angeles’ raw grab for the water rights of the entire Owens Valley – Robert Towne unfolds it through writing an intimate noir mystery. And while there’s no narrator’s voice over, we follow every twist through the eyes of Jake Gittes (Jack Nicholson, marvellous), the private detective who’s there in every scene. Jake may be a sideshow, the hired gumshoe pulled obliquely into events way beyond his pay grade, but his curiosity and persistence are what lead us through the maze. Each of those elements – the noir mood, the private-eye as narrator, the big story told on an intimate scale – is also there in Shamus Dust.

As for the two stories themselves, they’re as different as their settings. Shamus Dust plays out in the square mile of high finance called The City – London’s Wall Street – in the early years of Cold War. Hundreds of its acres, some of the most valuable on the planet, are still rubble after wartime bombing. City fortunes are being staked on their reconstruction. But if that all sounds a long way from California, the two stories have other things in common too. For one thing, both are shifted in time: those Water Wars were fought more than thirty years before Chinatown is set, just as the events that spark Shamus Dust, in fact, happened some years later. For another, they’re each driven by greed and the sense of impunity of the very powerful. Both are stories of deviant wealth and civic corruption at the highest level. Both involve criminal sexuality. Both descend into routine murder for the cover-up.

Let’s not forget either that there’s a disconcerting, perplexing woman at the heart of both stories. Or that the private detective never quite gets ahead of her, first to last. Even their climates – sun-glare in Los Angeles, snow-blur in London – colour both the film and the book. So my Shamus Dust reviewer has a point about the parallels. I’m also happy to report that he ends: Brilliant writing, compassion and a biting sense of humour. Which sounds like Chinatown too, doesn’t it?

About the author: As a teenager, she read all of Raymond Chandler’s Philip Marlowe stories – not so long after they were written as she would like to think – and they knocked her socks off.

*-the price was taken from Amazon.co.uk and Amazon.com on the current date. The price might change at the time of your purchase. The links used in this post for book purchases are affiliates. The pictures used in this post were provided by the author.

Reviews of books to suit every budget and host of Goodreads Monday, Time Travel Thursday, All Over Instagram and Places My Books Have Taken Me!